Offering all kinds of services from the terminal operations to air traffic tower services and from Ramp Services to cargo terminal operations since the establishment of the Sabiha Gökçen Airport, HEAŞ started to implement aforementioned activities with stakeholders by assuming the responsibility of ground services authority as of 2008. In order to estimate the rapid developments in aviation sector in advance and to plan investments correctly, the company carried out Masterplan studies with ARUP, one of the leading international organizations of the sector, and created a road map and growth strategies for the development of the ground services. In this way, the targeted investments have been realized without losing time due to the increasing passenger and aircraft traffic. 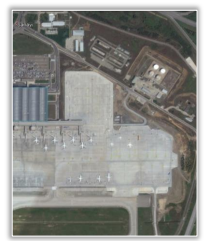 Due to the increasing interest of both airlines and passengers in Sabiha Gökçen Airport with the development of the aviation sector, passenger statistics as of 2010 was realized approximately as 1.5 times of the expected figures. Therefore, the development projects  of the PAT (Runway Apron Taxiway) sites specified in the Masterplan have started to be implemented without losing time. In order to solve the manufacturing difficulties of the work and to  make resource planning in a financial dimension, Feasibility and Advance Project studies for the runway project have been started in 2010 with ARUP. While continuing the runway project work, PAT field infrastructure investments were started by HEAŞ. The project and construction of Additional Aprons and integral parts to serve a total of 19 narrow-body (Code C) planes were quickly implemented. Our passenger apron plane parking capacity, which was 48, has reached 67 planes with this effort. Thus, our parking space capacity has increased by 40%. 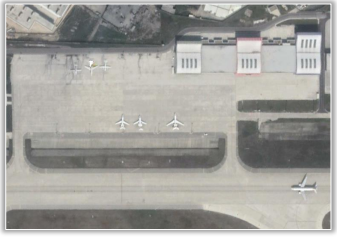 GENERAL AVIATION HANGARS
In order to enable daily maintenance and parking of business-jet planes, the hangar project with an indoor area of 10.000 m2 was implemented by HEAŞ in 2012 and  completed in 2014. There are 5 different sizes of hangar structures that can be used  separately if necessary, as well as technical offices connected to these premises.

DE-ICONG APRONS and INTEGRAL PARTS
To be able to carry out the de-icing operation from a single point without reducing our existing parking space capacity and in order to allow plane quickly make runway under extreme weather conditions in winter construction of the de-icing apron and its integral parts has been carried out by manufacturing 115.000 m2 coated fields for intensively used 06 runway.

QUICK EXIT TAXIWAYS
On November 2015, as a result of the instructions and evaluations of the General Directorate of Civil Aviation, the „Quick Exit Taxiway‟ project was completed and put into operation in May 2017, carrying out works at night closures of the airport. A positive contribution was made to increasing the hourly capacity of the runway by reducing the time of runway occupation.

After the opening of the 2nd runway, we aimed to carry out maintenance and repair activities by closing our existing runway located on our air field to traffic, while these maintenance and repair activities had to be completed earlier in the face of increased traffic. Therefore, by evaluating all the risks under heavy traffic and renewing our runway at closure periods only for 5 hours at night with advanced construction  techniques to a high extent and with special materials of R& D products it has been ensured that operations continue more comfortably and safely.

The “Rapid Concrete Night” event was hosted with 50 participants from 10 countries related to the works conducted. During the COVID-19 period, which affected the whole world, our airport was closed for a  short period of time, such as 25 days, and during the flight operation, all the productions that would pose a risk were carried out on these days that were closed. In this way, according to the statement made by the Council of European Airports (ACI Europe), Sabiha Gökçen Airport has been awarded the Highly Praised Airport award in the category of airports with 25-40 million passengers.

CO-JEN FACILITY
As a result of the works  carried out on sustainable Energy resources, a Co-jen facility has been established in our airport. With the commissioning of the facility, an environmentally friendly alternative will be provided for energy supply.

DEVELOPMENT OF THE NORTHERN REGIONAL AIRSPACE 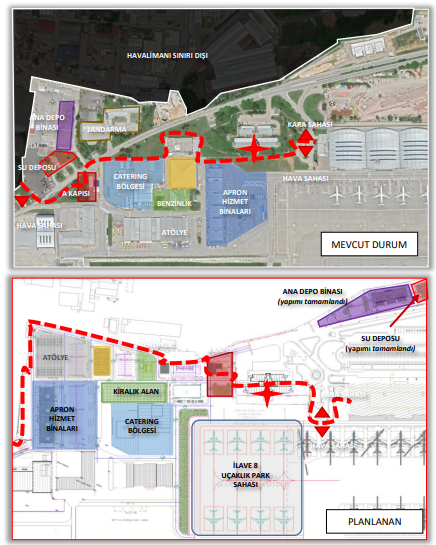 The Northern Regional Airspace Development Project is a development project aimed at meeting the growing demands for space on the air side in accordance with the needs of the current operation of our airport. To date, the Water Tank and the Main Warehouse Building have been completed and opened for operation within the scope of the project. 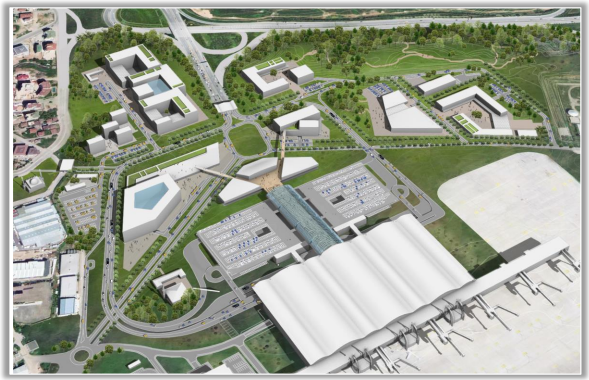 All investment plans of our airport are carried out in the light of the Masterplan. Therefore, in 2018, the Masterplan was updated and it was planned how and when we will implement our new investments in accordance with the passenger capacity increases. In addition to the masterplan, the AIRPORT CITY project has been started to be implemented to provide different functions that will create an attraction center on the land side of our airport that will also indirectly contribute to passenger traffic at our airport. Within the scope of the project, we aim to grow even more with facilities that can be integrated with the terminal such as Medical facilities, Hotels and Conference Rooms and that will add value not only to our Airport but also to our country and provide added value. 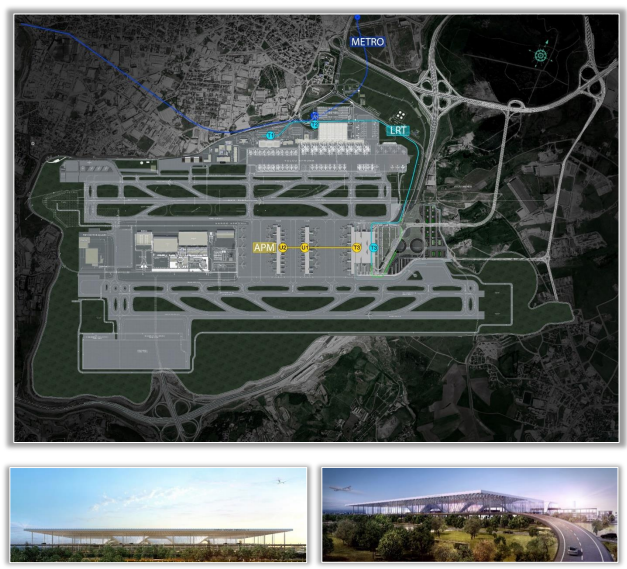 With the decision to build the 2nd runway, terminal growth strategies have been worked out in parallel with the capacity increase in the airspace and a project competition was organized by inviting five Architectural offices that are experienced in the construction of terminals that also operate internationally in Turkey related to construction of 3rd terminal. As a result of the competition, the design of the Tabanlıoğlu Architectural office was selected as the most modern, environmentally friendly and sustainable project, and entitled to be the Project Manager of the Sabiha Gökçen Airport 3rd Terminal Building and its integral parts. With the implementation of the project, the Main Terminal Building will serve 25 million passengers / year and 35 million passengers / year with the construction of Satellite Piers. In addition, with the expansion of the Main Terminal building, the capacity will be increased to 41 million passengers / year. Together with the realization of all investments, Sabiha Gökçen Airport will have the potential to serve 80 million passengers/year as maximum capacity.

A Rail System connection will be provided between the Kadıköy-Kartal- Kaynarca metro line from our airport, which provides intercity and international air transportation to Istanbul and passengers will be transported to our airport safely, punctually and economically. The tender of Sabiha Gökcen Airport Rail Link construction and electromechanical systems procurement, installation and commissioning works organized by General Directorate of Infrastructure Investments (AYGM) awarded to Gülermak –YSE Ordinary Partnership Company. 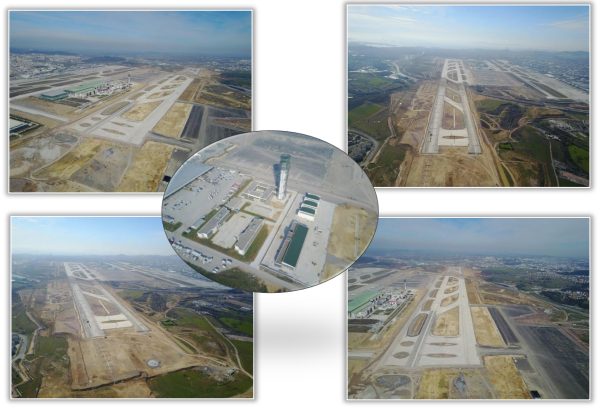 Because our airport, which has become the Center of attraction of the Anatolian side and nearby cities due to its location, has grown too large to operate with a single runway, the second runway project, which provides the possibility of simultaneous operation, is being built by the Undersecretaries for Defense Industry. The project is being carried out by the State Airports Authority (DHMI) and is expected to be operational in 2023.

With the increasing demands on our airport, space allocation agreements have been signed with RedStar, Express Aviation and Pegasus Airlines regarding the new areas that will be opened for construction and to make hangar investments within the scope of the II runway project, Thanks to this project, our airport is growing even more with the right investments without slowing down.